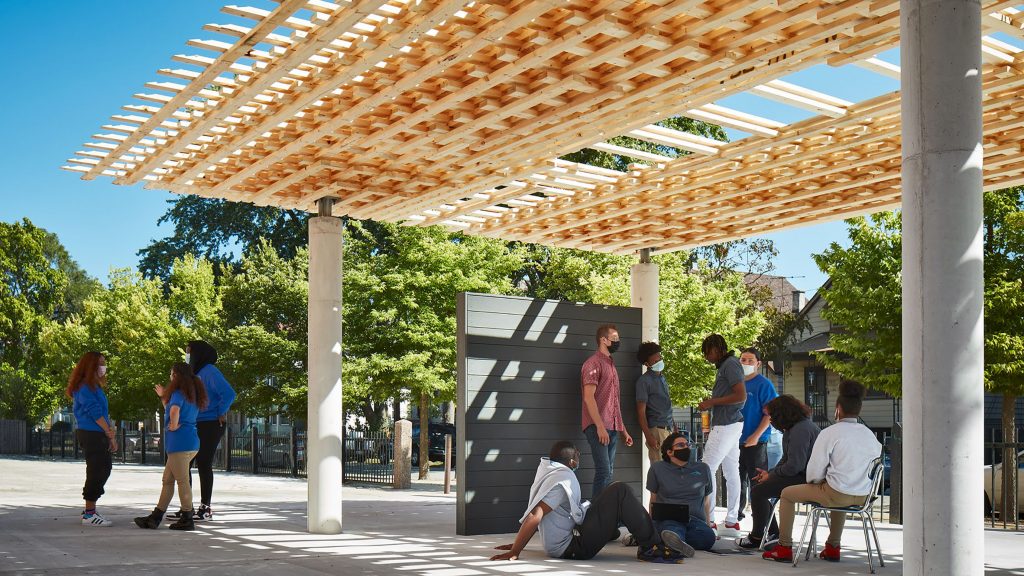 SOM worked with the University of Michigan’s Taubman College of Architecture and Urban Planning to explore a low-carbon alternative to conventional timber framing called SLT and build a pavilion to demonstrate its capabilities.

Skidmore, Owings and Merrill (SOM) worked with a university group led by Professors Tsz Yan Ng and Wes McGee on the innovation, which they used to manufacture the SPLAM pavilion (i.e. SPatial LAMinated timber). It is now on display as part of the Chicago Architecture Biennale 2021.

They say SLT presents a more sustainable, low-carbon alternative to conventional wood framing systems for two reasons. First, it opens up the possibility of using wood from rapidly renewable forests or even salvaged components from deconstructed buildings, as the parts needed are small.

Second, it requires less lumber overall than other frame construction methods. SOM estimates that it reduces material usage by 46% compared to CLT panels.

“SPLAM” stands for “Spatial Laminated,” referring to how the conventional two-dimensional cross-laminated timber system has been exploded to create a three-dimensional matrix of timber elements,” said Scott Duncan, SOM Design Partner, in Dezeen.

“The resulting introduction of depth allows for the subtle cambering of forces which, in turn, results in less structural material.”

If used throughout an entire building, SOM says SLT could significantly reduce wood consumption and the overall carbon footprint.

Architects see SLT used as precast panels in low to mid-rise construction, where conventional wood framing is permitted by building code and often selected as the most economical option.

“The SLT is durable and dimensionally stable like the CLT and offers a similar level of fire
protection than conventional timber framing,” said SOM Structural Engineering Manager Benton Johnson.

“SLT can further reduce the material and energy consumption of buildings at this scale and represents a sustainable alternative between conventional framing and CLT.” 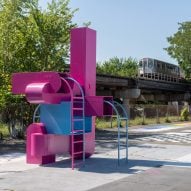 Ten installations to see at the Chicago Architecture Biennale

The SPLAM pavilion is a single-storey, full-scale prototype of such an SLT framing system. It is made up of 912 pieces of wood, connected by 12 layers of interlocking joinery inspired by ancient Japanese techniques.

To design it, SOM first carried out a series of structural analyzes to find an optimized layout that minimized the use of materials.

SOM’s structural group then developed the design through computer modeling, while the architects researched and tested the appropriate joinery techniques.

“A CNC machine custom-shaped hundreds of unique wooden elements with a high degree of precision that would have been virtually impossible to achieve by hand,” Duncan said.

He said the process stood out for its efficiency as well as its sustainability.

“What was remarkable was how quickly the manufacturing was completed,” Duncan said. “Making the entire 912 limbs took about three weeks.”

The SPLAM Pavilion is located on the South Shore campus of Chicago’s EPIC Academy High School, where it will host performances during the Biennale.

Thereafter, the pavilion will remain on the site and will serve as an outdoor classroom and performance hall.

SOM is a global architecture firm founded in Chicago with a history dating back to 1936.

His best-known buildings include the world’s tallest building, Dubai’s Burj Khalifa, and New York’s One World Trade Center, while his recent projects include Moon Village, a lunar settlement concept developed with the European Space Agency. .

SPLAM is open Saturdays from 12 p.m. to 5 p.m. for the duration of the Chicago Architecture Biennale, September 17 through December 31, 2021.

SOM Biotech presents positive Phase 2a data with SOM3355 at