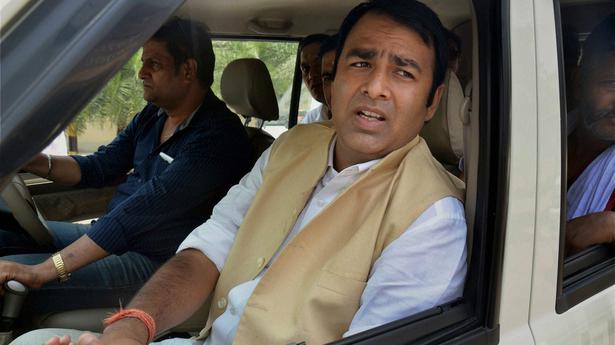 The former MP also targeted the Bharat Jodo Yatra in Kerala, alleging that only green flags were hoisted in the yatra and hardly any national flags were used.

The former MP also targeted the Bharat Jodo Yatra in Kerala, alleging that only green flags were hoisted in the yatra and hardly any national flags were used.

Former BJP MP from Uttar Pradesh, Sangeet Som has again created controversy by alleging that the population of only one particular community is increasing and that the Rajput community should take up arms in future to stop” Sar Tan Se Juda » (beheading) and terrorist threats. Both comments were aimed at the Muslim community which is the largest minority group in the state. The former MP also targeted the Congress Bharat Jodo Yatra in Kerala and alleged that only green flags were hoisted in the yatra and hardly any national flags were used in the state.

Addressing a gathering of the Rajput community under the banner ‘Rajput Utthan Sabha’ in Meerut, Mr Som said: “We have to be concerned about the growing population. Our population is decreasing, but the population of a community is increasing. It is possible that in the future we will need to take up arms, while terrorism reigns everywhere.

The former MP also targeted Bharat Jodo Yatra of the Congress party. “I was watching the Congress yatra in Kerala, and there were only green flags… hardly any national flags were raised. The time is not far off when even in western Uttar Pradesh the green flag will be seen.

Later, speaking to reporters, Mr. Som added: “The Rajputs will have to take up arms in the future to stop Sir Tan Se Judah threats. When the Rajput community takes up arms, no one would dare to threaten Sir Tan Se Judah and create terrorism.

Sangeet Som, a former two-term MLA from the Sardhana Assembly segment in Meerut, is considered a Hindu hardliner and named in numerous cases related to the Muzaffarnagar riots in 2013. The Vishnu Sahai Justice Commission which has was formed after the riots named him in the list of those responsible for the outbreak.

In 2015, the former MP spoke out in favor of jailing the family of Mohammed Akhlaq, who died in the Dadri lynching incident, and promised bail for the accused in the case. In the same year, the anti-cow slaughter campaigner had to deny reports that he was associated with two meat processing and exporting companies. He lost in the 2022 Assembly elections by a margin of over 18,000 votes to Samajwadi Party (SP) candidate Atul Pradhan.