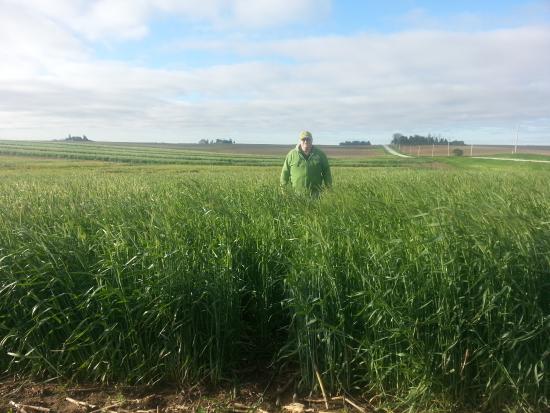 Long before the emergence of the carbon market that offered economic incentives for farmers to adopt soil conservation practices such as no-till and cover crops, Jack Boyer had already discovered the value of these practices.

In the mid-1990s, Boyer, a corn and soybean farmer from Reinbeck, Iowa, began planting his soybeans without tillage. No-till planting in commercial corn came later, as did his early on-farm experiments with cover crops.

On-farm research has shown him that cover crops can help him reduce chemical applications, reduce nitrogen inputs and eliminate the cost of cleaning up eroded soil buildup from streams. All the while, cover crops were building soil organic matter.

“Initially, I switched from conventional tillage to no-till soybeans to save labour,” says Boyer. He and his wife, Marion, farm some 750 acres without outside help.

“I was also interested in conserving moisture because I first grew on really sandy soils,” he says. “But now I’m growing very productive soils.”


The Boyers’ desire to leave the soil better than they found it prompted them to try cover crops. Of most concern was the degradation of soil organic matter after decades of tillage resulting from part of the farm’s family history in a rotation of seed corn and soybeans.

The seed corn business for which the family grew seed required “black” soil conditions between the rows. “As a result, the soil contained only 2.5 percent organic matter, compared to 6 percent in the fences, where perennial grasses grew without soil disturbance,” Boyer says.

His first experience growing cover crops was planting just 50 acres of annual ryegrass in seed corn. “I flew the ryegrass seeds in mid-September,” he says. “It came out and looked good, reaching 3-4 inches tall. But it froze in the winter. That’s a problem for us because our goal is to have live roots in the ground the most days. possible.

As a result, cereal rye became his favorite cover crop species, and today 100% of the farm’s acres are planted with a cover crop. A multi-species cover grows on a small area of ​​land where Boyer grows grain rye to harvest the seeds to use for his own cover crops. He also sells cover crop seeds and uses them in the custom cover crop planting he does.

The July harvest of rye for seed allows time for a mixture of warm season multi-species cover crops to establish before winter and further strengthen the soil. “I add rapeseed to the mix, and 25% of the rapeseed will overwinter; everything else will be killed by winter,” he says.

Boyer no-till plants all commercial corn and soybeans. He can also now use the strip-till to plant seed corn, as the seed company has relaxed tillage requirements.


The combination of growing cover crops and reducing tillage has improved soil health. “Over the past 10 years, we have seen soil organic matter increase by 1%,” he says. “He is now testing for 3.5% organic matter, even on fields that are long-term seed corn fields. The increase in organic matter improves the water holding capacity in the soil as well as the nutrient holding capacity. It makes nutrients available longer.

“The soil structure has also improved,” he says. “The soil used to be a plate-like structure, now it has a structure like cottage cheese. This allows more air into the soil, allowing more soil biology to live. seep into the ground.

Boyer noticed the benefits of better water infiltration after just one year of growing cover crops. His first experience growing grain rye was in a field that had been rotated with soybeans and seed corn for 70 years. “After a heavy rain, we would usually see water pooling on that field,” he says. “But on the part of the field where we had 50 acres of grain rye, there was no pooling after a big rain.”

In addition to improving the soil structure, “soil erosion has disappeared,” he adds. “Before we grew cover crops, I had to clean the waterways every seven years. I haven’t had to clean them at all since we started growing cover crops. It’s money saved.

Another cost offset Boyer realized from growing a cover crop was the elimination of a herbicide application. In an on-farm trial conducted in conjunction with Practical Farmers of Iowa (PFI), he evaluated the effect of cover crops on weed control.

In one field, he had alternated strips of cover crops with strips without cover crops. All strips were to be planted with no-till soybeans. He finished grain rye in some cover strips 10 days before planting, and in other strips he finished rye 10 days after planting. “The rye was 24 inches tall when I planted the soybeans,” he says.

Reduced nitrogen use is another cost saving Boyer achieves with its no-till/cover crop system. “I found that I could reduce the amount of nitrogen I was applying to corn by 40 percent,” he says. “I believe the biological life in the soil makes natural nitrogen more available to plants. This saving more than pays for the cost of cover crop seeds.

Despite reduced N use, Boyer found no decrease in yields of untilled commercial maize.

Reports of on-farm trials from Boyer and others with the PFI are available at practicefarmers.org/research/.

“I speak publicly about cover crops,” adds Boyer, who has been named a soil health champion by the National Association of Conservation Districts. “By sharing my experiences – good and bad – I hope I can help others learn how to use cover crops to their advantage.”

The new insights can help new users of no-till and cover crops better position themselves to find potential opportunities in the carbon market. “Adopting strip-till, no-till, cover crops or finding ways to reduce nitrogen – each of these is a step towards earning carbon credits,” he says.

Opening of the “breathing” building of SOM in Shenzhen