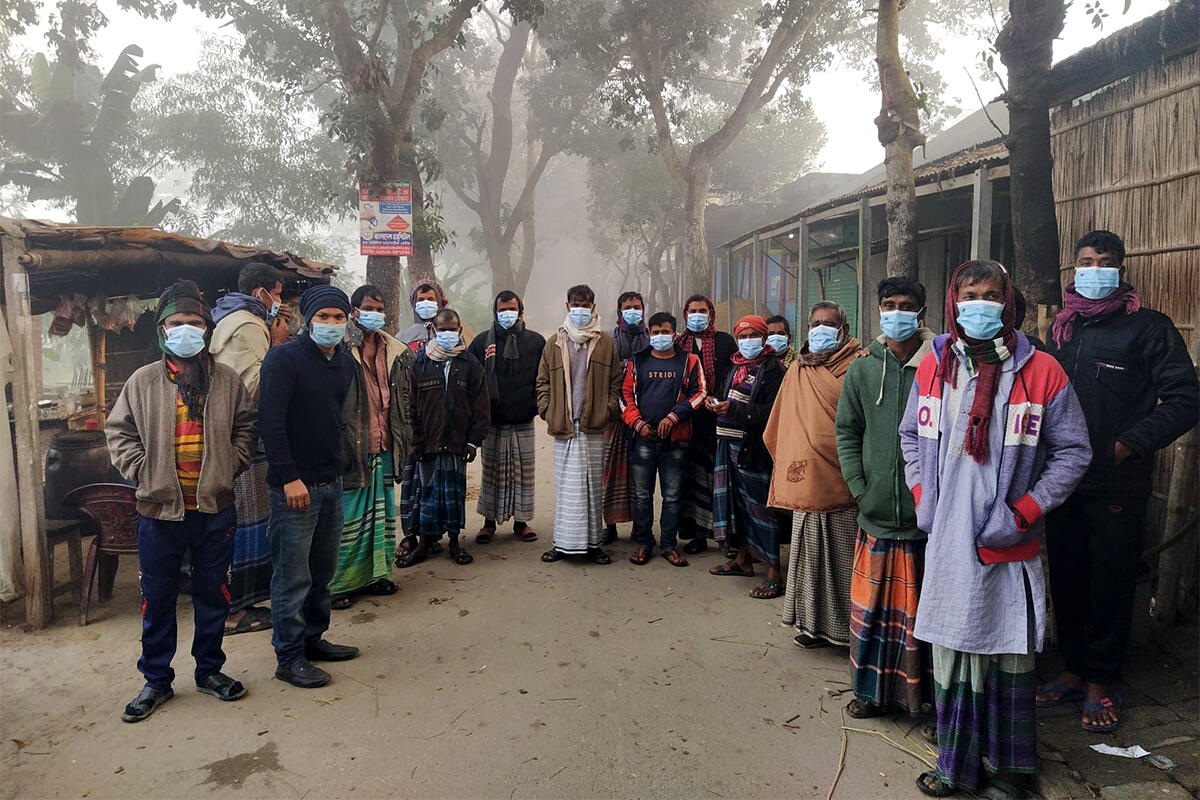 Masks can save lives in areas where access to vaccines is limited. A program stemming from Yale SOM research brings them to sometimes isolated rural areas and encourages their use. It has reached 100 million people in Bangladesh and other South Asian countries thanks to the impetus of Hanesbrands Inc. and essential support from local governments.

A research-based initiative launched by Yale SOM faculty to promote the use of face masks in the developing world is gaining momentum, thanks to budding relationships with government officials and non-government implementers in targeted countries, and boosted by donation of 80 million masks from Hanesbrand, Inc.

“We are seeing the program adopted on a larger scale, especially in the hard-to-reach rural parts of Bangladesh,” said Ahmed Mushfiq Mobarak, an economics professor. “Hanes’ generous contribution and buy-in from local governments is extremely helpful.”

Since the start of the COVID-19 pandemic, Mobarak has been part of a team of researchers studying how to deal with the crisis in the developing world, particularly in South Asia. His research on mask implementation, co-authored with his Yale SOM colleague Jason Abaluck and other scholars, has spawned the mask campaigns currently in place in Bangladesh, Nepal, Pakistan, India and in parts of Latin America.

Their study showed that a “cocktail” of four interventions combined significantly increased mask use. Items include free masks delivered to people door-to-door; offer information on the benefits of masks; strengthening the wearing of masks; and modeling and endorsement by trusted local leaders.

To reinforce these key elements, Mobarak and his team – which includes researchers from Stanford Medical School and the NGO Innovations for Poverty Action (IPA) – created a mnemonic acronym: NORM.

“This is an evidence-based program based on randomized controlled trials,” Mobarak said. “It was a challenge, but within months partnerships were in place to reach 100 million people.”

The Yale/IPA/Stanford research team has expanded and now provides technical assistance to government partners to facilitate large-scale implementation of the NORM model. The team made an initial pitch to Hanes, encouraging the company’s mask donations, helping with their global transportation logistics, and organizing fundraisers to cover shipping costs.

Jerry Cook, Hanesbrands’ vice president for government and business relations, said the company has already donated 34 million masks to India and is now branching out with donations to Pakistan, Nepal and Nepal. Bangladesh to facilitate the implementation of the NORM model. In total, Hanesbrands has donated over 110 million masks to date.

“It’s our way of trying to help people deal with this terrible reality,” Cook said. “We are grateful to be able to be part of this effort.”

In Bangladesh, NORM has partnered with BRAC, an international NGO based in Dhaka. Together with government officials, BRAC led efforts to distribute masks and educate people about the pandemic. More than 81 million people are reached by this programming.

As BRAC’s COVID-19 response program coordinator in Bangladesh, Imran Ahmed Chowdhury worked with NORM to lead the effort. “Coordination with government agencies at local and central levels has been key,” Chowdhury said. The distribution has included homes, as well as community “hotspots” like bus stations, mosques, malls and markets.

Even during Eid-ul-Azha, when movement restrictions are eased to facilitate home trips, BRAC volunteers have continued their work on the ground providing free face masks. BRAC also relies on the endorsements of local community and government leaders, mosque imams and other community influencers for support in creating an environment that enables best practices.

Support from community and faith leaders has been crucial, said Tanjila Mazumder Drishti, senior advocacy, knowledge, communications and partnership management officer at BRAC. “It works really well,” she says. “We are fighting a global crisis with a local solution by empowering local people to lead behavior change.”

“The model was already very actionable,” Rehman said. “It just had to be adapted to a big city like Lahore.” A comprehensive awareness strategy, including mail parcels, flag parades and citywide marketing materials, was rolled out across the city. Support from local influencers, celebrities, social media and a launch event on June 30 with the Punjab Health Minister, Postmaster General and Lahore Commissioner all played a role. The citywide campaign in Lahore has already reached 5 million people, and the country’s federal COVID coordination body, the National Command Operations Center, has suggested that this response be replicated across the country. country.

Captain (R) Muhammad Usman, Commissioner of Lahore, said new challenges are facing governments around the world as the pandemic evolves.

“When the NORM model was introduced to us, we reached out to key stakeholders and partners who helped us implement the model,” Usman said. “The #LahoreWearsMasks campaign has been launched. The results were very encouraging and the model was even endorsed by the NCOC, the highest COVID watchdog in the country. The sharing of knowledge and the replication of the campaign across borders testify to the maturity, scientific and administrative perfection of this model. We are already planning to launch #LahoreGetsVaccinated in partnership with the research team.

The Nepal Covid-19 Crisis Management Center (CCMC) has agreed to support NORM. “We hope the NORM model will benefit both urban and rural communities by encouraging mask wearing, especially to mitigate the effects of the possible third wave of COVID-19 in Nepal,” said Brigadier General Dr Arun Neupane, who directs the center’s medical division.

The Bill & Melinda Gates Foundation donated to the efforts in Nepal. “We are pleased to see that the NORM Project is now partnering with the Covid-19 Rapid Action Task Force Alliance for a nationwide campaign,” said Roshan Raj Shrestha, Deputy Director of the Gates Foundation for Global Growth and Development. opportunities for water, sanitation, and hygiene. “We are happy to be part of this program and hope to get the full support of the government and development agencies in this crucial mission.”

The NORM project is also branching out to Latin America, where initiatives in Mexico, Uruguay and Peru are being considered, according to Jose Pinilla, policy manager at Innovations for Poverty Action.

“We partnered with Uruguayan Senator Carmen Sanguinetti, and adapted the tools we used in the original study to collect systematic data on mask-wearing around Montevideo, with support from the Inter-American Development Bank (IDB),” Pinilla said. “We have also supported the government of the state of Guanajuato, Mexico, as they work on a plan to encourage mask wearing.”

Two recent Yale SOM graduates are also part of the NORM Project campaign. Janani Rajashekar ’21 assists Mobarak as ‘Scaling Coordinator’, organizing the delivery of resources, as well as communication and coordination with potential partners. Preeti Adhikary ’21 is the Nepal and Social Media Manager for the NORM campaign. Adhikary’s mother contracted COVID-19 in February 2021 and survived after three weeks in the intensive care unit. “For me, COVID is so personal,” Adhikary said. “When the second wave started in Asia, I really wanted to help fight it.”