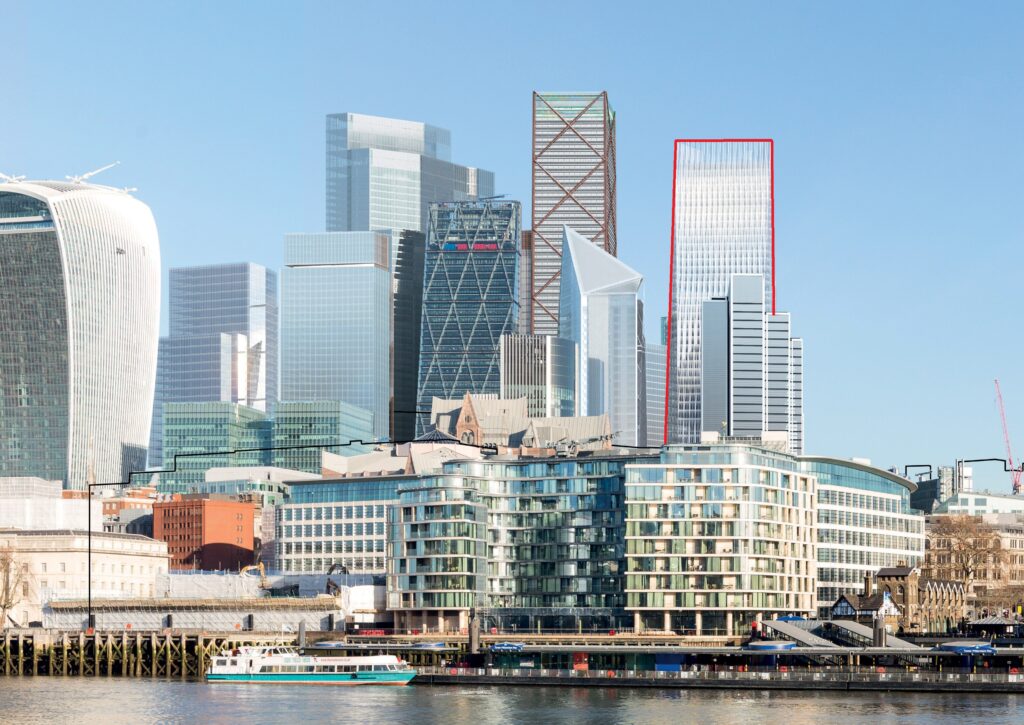 The tower, dubbed Cheesegrater 2, obtained planning permission in 2018 and is due to be built by Hong Kong-based developer Lai Sun from 2023, once vacant possession of the existing offices at 100, 106 and 107 Leadenhall can be obtained.

Before work began on the site, the architect said the project would comply with the RIBA 2030 targets, which specify the maximum amount of emissions per square meter that new buildings should produce for the UK to be on the on track to become net zero carbon by 2050.

It is believed to be the first UK skyscraper specifically targeting RIBA 2030 targets. Leadenhall, is residential and not fully glazed – would be ‘net zero carbon’.

Some architects and engineers have already expressed doubts about the sustainability benchmarks for high-rise buildings. Tim Snelson, managing partner at Arup, said skyscrapers have about twice the carbon footprint per square meter of low-rise and mid-rise buildings.

However, SOM design partner Kent Jackson said: “We are striving to achieve RIBA 2030 around operational carbon – and where we are with embodied carbon, we expect to be well below the RIBA 2030 targets. “

“We are still in the design concept stage, revisiting our original design. We are convinced that we can touch both [RIBA targets on carbon] and I hope it will be carbon neutral.

SOM said the design changes to 100 Leadenhall will be made under the current planning permission or through minor changes to the existing application.

“The overall mass of the building hasn’t changed, but we’ve reduced the number of materials in it,” said Mina Hasman, sustainability manager and senior associate director at SOM. “We have reduced the project’s embodied carbon by 35-40 percent.”

SOM said the three most significant steps that helped reduce embodied carbon were a reduction in spans, a more efficient and reconfigured core, and a changed floor composition from a steel beam and steel deck to a post-tensioned slab.

However, Hasman said a significant amount of embodied carbon was also saved through the reduction of parts used in MEP systems, which were being overhauled anyway due to greater demand for air more fresh after the pandemic. The fan core has been moved to an underfloor system, which also reduces the depth of the floor sandwich.

The practice is also pushing for the inclusion of air capture technology to the top of the tower, in addition to the plant which is already on the upper floors – although a decision on this has yet to be announced. was taken.

The changes to 100 Leadenhall were partly informed by SOM’s research into how to make skyscrapers “act like trees” and capture carbon from their surroundings – so that a “forest” of tall buildings can actively combat climate change.

The Chicago-based firm presented its findings on its “Urban Sequoia” concept at COP26 in November.

Jess Hrivnak, RIBA’s Head of Sustainability, said: “It is imperative that we minimize the energy and carbon footprint of buildings to ensure they are as efficient as possible, before offsetting. As the industry works together to achieve net zero, our 2030 Climate Challenge defines a series of in-use performance targets that practices should aim for.

“Depending on complexity, location and form factor, some projects will be more difficult than others, but our maximum threshold targets can and should be used as targets for all projects.” By joining the 2030 Climate Challenge, approved firms agree to submit project data 12 months after occupancy.